The new season is almost finalised. When everything is confirmed the whole season and performance dates will be posted here.

The first production will be 'A Life' by Hugh Leonard in November.
Below is a piece by the Director... 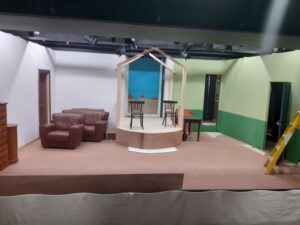 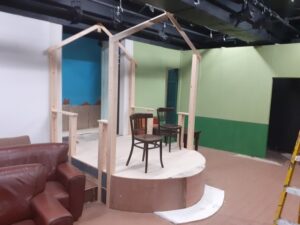 Life came to an end on Thursday 12 March, 2020, or rather A Life did. My cast of eight staunch players had been immersed in the rehearsals for Hugh Leonard’s bitter-sweet memory play for just over four weeks. As moves were being finessed, lines learned and characters inhabited, we’d been aware, to paraphrase Shakespeare, that despite our efforts being “such stuff as dreams are made on … our little Life was rounded with a leap” in the infection rates for Covid-19. There had been some desultory discussion at rehearsals, speculating how the new virus might affect box-office, with the prospect of punters being wedged in their seats, cheek by jowl. We wondered if that theatrical bugbear, the persistent cougher, might loom even larger, from being a mere irritant to actually managing to clear the auditorium. Behind the scenes, these qualms were being echoed in more serious terms by the Lyceum grandees and, on the morning of 12 March, I received a long, cogent e-mail from Phil  McCarthy, cancelling the play. He pointed out that, with the rate of transmission, the Lyceum’s loyal audience would, by opening night, in two weeks’ time, be understandably spooked and discouraged from crowding together, even in the name of Art and Entertainment, and with so many backstage and front of house staff too, we couldn't dice with our members’ or audiences’ health and well-being.

It was a sad little gathering onstage at 7.30pm on 12 March. Most of the arriving cast were totally unaware of the decision that had been made and were side-swiped by the news. Lines had been committed to memory, Irish accents (largely) mastered, the splendid set with its central bandstand was taking shape, even music cues had been agreed. We all saw the sense of the postponement but it was a muted, chastened wake in the bar, with our compensatory drink on the House. We ruefully cracked jokes, gave each other tentative little hugs and muttered somewhat downbeat words of encouragement. I did feel myself faltering rather as I handed over my Director’s door-key. It is an emotional investment, putting on a play, especially when we aspire to the Lyceum’s celebrated standards. There’s no doubt we had a terrific cast, a second-to-none support network and a treasurable play.

The decision to close, however, proved timely and prophetic. Most of our colleagues at Shaw Playhouse, the Millbank Centre, Delph and Rochdale’s Curtain Theatre bowed to the inevitable, followed suit and had cancelled their April shows by the end of March. Little were we to know that we represented the topmost tip of a huge, destructive iceberg, in which all the performing arts have been frozen in the months since. Theatres have posted retrospective stills of their glory days on their websites, poignant messages invoking the Dunkirk spirit have surfaced and snippets of lock down Zoom have signalled a certain creeping desperation that our sociable, communal strivings could hardly be replaced by solo turns out there in the ether.

Hugh Leonard’s play tells us to make the best of our lives. He does it through a quartet of friends seen in the 1930s, intercut with the same foursome (or, rather, their older selves) 40 years later. We see them making youthful mistakes and still regretting them more than a generation on. The detail of their intertwined lives is remarkable and it all bowls along with a gusty, gabby Irish humour. It reminds us of the rough-and-tumble of friendship, the  affection and disdain, the ambitions and disappointments. To have been interrupted from telling these characters’ lives has mirrored our own separations in this last year.

Someone said that friendship is like a garden; you need to keep it watered. This has been true for so many of us, insufficiently connected by wonky technology. At best, our own stories too have only marked time lately and the fond, hopeful process of putting on a play, finding out about ourselves, has been packed away and mothballed. Making the best of our lives (and Leonard’s characters’) just hasn’t been possible for so long. But the set still stands and fingers are crossed for a new start in 2021. Bolstered by falling infection rates (at time of going to press!) and the onward surge of vaccination, there’s every cause to hope.

There’s a great yen to be back in harness and a resumption of the production has now been mooted for late November. Inevitably, with a lay-off of over 18 months, some recasting has been necessary; after all, people’s lives, unlike written characters, do move on and change. I salute those actors who worked so hard but were wrong-footed by this rotten collision of circumstances. But we will all, no doubt, newly throw ourselves into the fray to conjure up a good production. I hardly dare to hope for plain-sailing this time round; complacency will invariably catch you out. We can’t know what successes or reverses lie ahead. But the will is there!